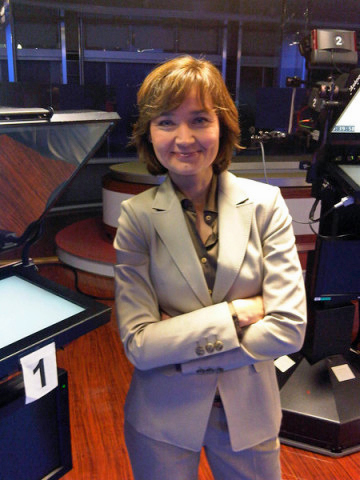 MONIKA JONES is one of Germany's leading bilingual journalists and presenters. As an English speaking news anchor at Germany's global TV broadcaster, Deutsche Welle, she is familiar to a wide international audience, especially in North America, Asia, Africa and the Middle East.

Monika is currently a news anchor for Deutsche Welle's flagship international broadcast DW News. For many years, she was also the regular business presenter of DW Business Desk and Made in Germany - a globally transmitted, weekly magazine focusing upon the latest developments in the German business world.

Monika presented one of the largest Livestream events ever as the official presenter of the European Space Agency's historic Rosetta mission, which successfully landed the Philae space probe on a comet!

Equally at home in both the English and German languages, Monika has used her bilingual skill extensively as a translator. She is also one of Germany’s top audio-guide speakers, providing the English narrations for such major exhibitions as Salzburg Castle, The Berlin Natural History Museum, The Bach Archive, Sanssoucis Palace, and Dachau Concentration Camp.

!!! During the first two years of the Coronavirus pandemic, Monika was a regular presenter of DW TV's daily 'Covid-19 Specials', which used in-depth analyses and straight-talking interviews with leading scientists to inform an international audience about the origin, spread and measures to combat the virus. !!!